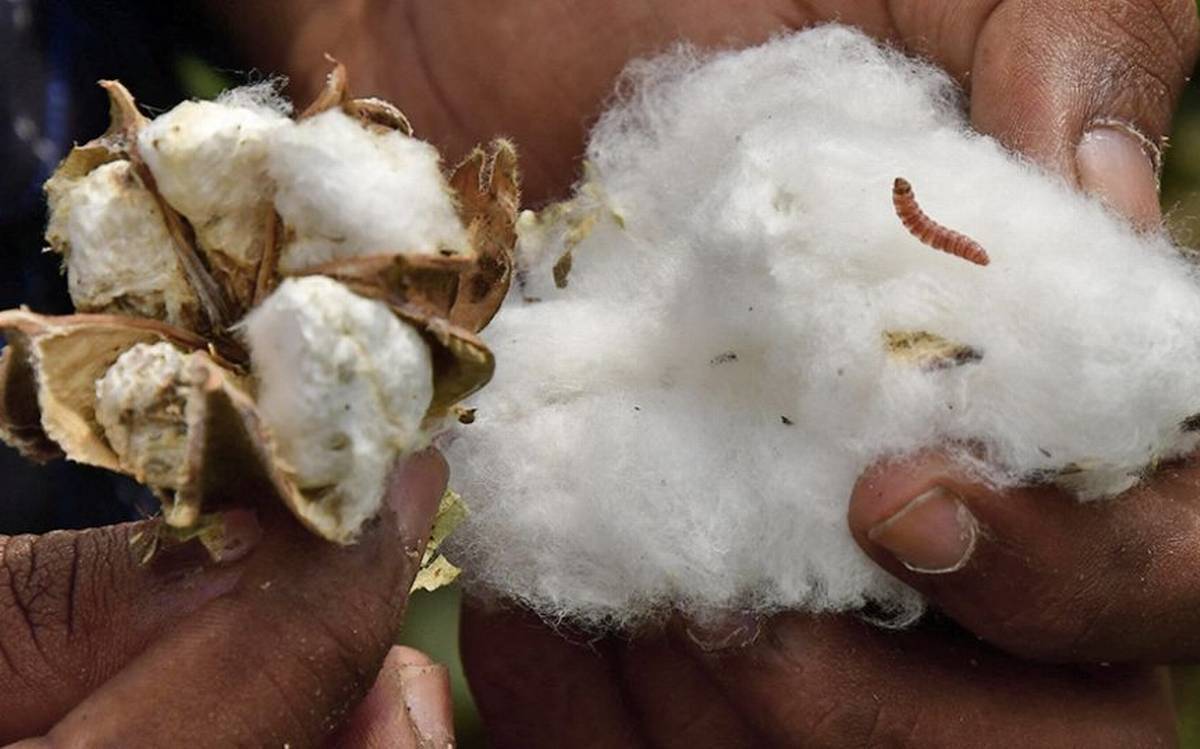 Special girdawari or harvest inspection of the south Malwa region states 70-100% damage of the cotton crop due to pink bollworm attack in Bathinda and Mansa districts.

These two worst-hit districts comprise almost half of the total of 3.25 lakh hectares under cotton cultivation in Punjab this year.

Bathinda has the largest area of 96,000 hectares of Punjab under the cash crop whereas cotton was sown on 65,000 hectares in Mansa. In 2020-21 kharif season, Punjab had produced about 50 lakh quintals of raw cotton and Bathinda had led with 14 lakh quintals. With 11.79 lakh quintals, Mansa was the third cotton-producing district. But the official assessment hints at a highly disappointing season for farmers this year with a drastic fall of production mainly in the two districts.

District authorities are compiling detailed reports for submission to the state government for its consideration of announcing compensation to affected cotton growers.

“Our teams extensively examined the fields to assess crop loss. Impact of pink bollworm was found severe in the entire district,” he said.

Chief agriculture office of Bathinda Manjit Singh more than 70% ready-to-harvest was found damaged in the district.

Bathinda DC Arvind Pal Sandhu said it will take another two days to submit a report to the state government.

DC of Fazilka, another major cotton producer of Punjab, Babita Kaler said no input of the pink bollworm attack was reported in the district till Monday.

Some pockets of villages in Lambi and Gidderbaha in Muktsar and parts of Sangrur district were also spotted with the pest.

Cotton is an economic lifeline of the semi-arid region of southern Punjab where it is a traditional kharif crop.

Bhartiya Kisan Union (Ekta-Ughrahan) is spearheading an agitation demanding a compensation of ₹60,000 per acre to cotton-growers and ₹30,000 to farm labourers as the pest attack has hit the rural economy of the cotton belt.

Since October 5, they have been holding an indefinite dharna outside the residence of state finance minister Manpreet Singh Badal at Muktsar’s Badal village.

Farm experts say other major cotton growing states, such as Karnataka and Maharashtra, have been reporting PBW over large areas since 2015, it is for the first time that Punjab faced a pest attack of this magnitude.

Officials of the state agriculture department said PBW attack was first spotted in Bathinda’s Jodhpur Romana village in 2018. Owing to poor farm practices, the unchecked population of the pest expanded in Bathinda and the adjoining district of Mansa.

Also, the pest attack is attributed to PBW infestation in the adjoining state of Haryana where 9 cotton-growing districts faced attack this season.

SK Verma, head of Sirsa-based Central Institute for Cotton Research, said stakeholders need to join hands ahead of the next sowing season to tackle the issues related to cotton production in a holistic way.

“Cotton growers should ensure that fields are cleared of the residue and up to 20 pheromone traps should be set up in an acre to detect a population of the deadly pest,” he said.