Thousands of jobs can be created across Northern Australia if conditions which support investment, innovation and sustainable growth are made available, according to a new report from the Cooperative Research Centre for Developing Northern Australia (CRCNA).

The State of the North 2020 report is a first-of-its-kind roadmap for the economic development of Northern Australia, and included horticulture industries such as mangoes, avocados and lychees in Western Australia, Northern Territory and Queensland, north of the Tropic of Capricorn.

CRCNA Chair Sheriden Morris says as the region transitions to a post-COVID-19 recovery, creating the best conditions for economic growth are critical and the opportunity the North presents must not be overlooked.

“The industries we’ve worked with want to see the government and industry work better together to prioritise infrastructure and supply chains in Northern Australia, and upskill local workforces in a way that meets the long-term needs of the north,” she said. “They are ready to take advantage of the opportunities that have been identified, and now we must bring all key stakeholders together to collectively map the focus areas for investment.”

While the research was primarily conducted in a pre-COVID-19 world, it shows many of the vital agricultural sectors can expand and deliver economic opportunity of national significance.

The report recognised that mango and avocado exports from Australia predominantly come from Queensland, the Northern Territory and Western Australia, while 99 per cent of lychees produced in Australia are grown in Queensland.

Apart from the weather, two of the major challenges identified for these produce sectors was cold chain gaps and breakdown and the transport and freight costs – both domestically and internationally. To help overcome this CRCNA proposes building and strengthening existing supply chain governance and collaboration arrangements across the mango, avocado and lychee sectors, as well as the better integration of digital technologies like blockchain to inform and enhance marketing decisions. 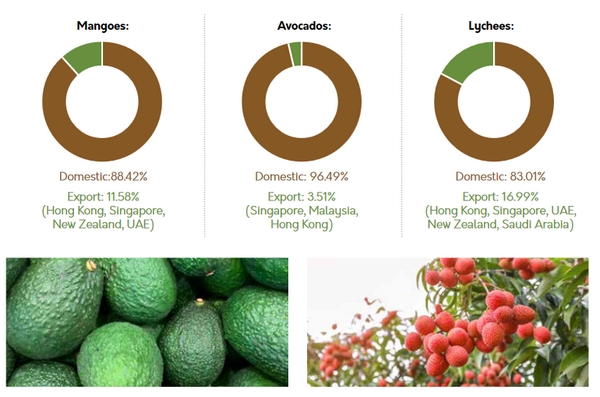 It also identified potential opportunities such as direct and regular air freight opportunities out of Townsville, Cairns and Darwin, supported by Vapour Heat Treatments (VHT) facilities. In addition to the replacement of imported avocados for domestic consumption and the expansion of tree crop production areas with new water infrastructure.

In Queensland’s Greater Whitsunday region horticulture generates $400 million of the gross value of production (GVP), from 230,000 tonnes of produce. The report identifies that there is a possibility with higher value produce such as mangoes, avocados and some vegetables to consider premiumisation, or marketing a product to enhance its premium dimensions.

As part of its next phase of work, the CRCNA will work with governments and the industry to facilitate further research on what is needed to deliver real economic impact for Northern Australia.

“It is clear that the current framework for planning across the agriculture sectors across Northern Australia is inadequate, but there is a latent opportunity for governments, private sector, and the community to work better together,” Ms Morris said. “The CRCNA calls on the government, industry, and private sector to reach out to be part of the next phase of the Northern Australia development agenda to help support the prosperity of the region.”

Spain - Storm Filomena caused €8.4 million worth of damage to crops in Murcia Region