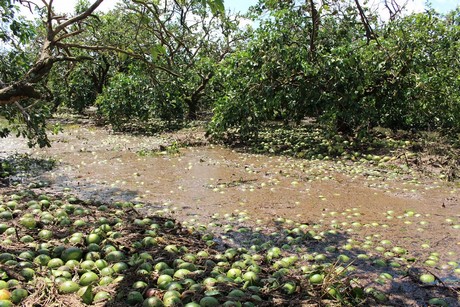 07.07.2021 165 views
The wrath of Hurricane Elsa was also very much felt in the agriculture sector, says president of the Barbados Agricultural Society (BAS) James Paul.

When the Category 1 hurricane swept over the island last Friday it dumped over six inches of rain causing significant losses to dairy, crop and poultry farmers.

Paul said it would take “some time” before a full assessment could be done to determine the impact Elsa had on the sector.

“The hurricane has had a very severe impact on the farming community. It might not have appeared so but there are some farmers who were significantly impacted.

“In terms of the fruits and vegetables we have not yet done any assessment of the extent of the damage done. With respect to some of the crops that would have been affected, the blossoms for lettuce and pumpkin might have been lost and that means there will be lost output on these farms. Where for instance you would be looking to benefit you now have to wait a further amount of weeks in order to benefit,” Paul said in an interview.

“The dairy sector has also been very badly hit. I know for instance that over the weekend some farmers would have had to dump milk largely because the Pine Hill Dairy was not able to pick up by Thursday or on Friday due to the issue of the damage done by the hurricane.”

He said poultry farmers did not escape unscathed as they now had to repair damaged animal pens.

One crop farmer who reported major losses was Glenville Blades.

He estimated he lost over $10, 000 when the high winds completely destroyed his half-acre crop of watermelons at his two-acre farm in Kirtons No. 3, St Philip.

He said the crop of yams that he had hoped to reap soon had been delayed by over a week because of the high winds brought about by Elsa’s passing.

“The yams were moved out of position. The wind uprooted them and I now have to spread them back over so that the crop that is being germinated can come through,” Blades explained.

“I haven’t lost the hot peppers, they are still holding their own, but there is a whole half-acre of watermelons that has been lost. I would say that is about $10, 000 because they were fruiting.”

Glyne Mayers, who operates a smaller farm nearby, said he was fortunate his yams withstood the raging winds and water.

He said most other crops would have been affected.

“The rain really did a number and the wind…but it ain’t really do the yams nothing really much. The water cut channels and do what it feel like but the yams were tough so they stood up to the weather,” Mayers said.

“If I had planted tomatoes, peppers, okras, anything so, I would be in bare trouble. The wind and the rain would have made a mess of them.”

In a brief comment, Managing Director of Gale’s Agro Products, Barry Gale said his business had not been severely impacted by the inclement weather.