Spring is a busy time for honey producers. Throw in the destructive antics of some hungry bears and it can all add up to one giant and expensive nuisance. And this spring is no different than previous ones for one New Brunswick producer, except this year the marauding bears have been bringing along the family to sample the luscious, fresh honey.

Tom and Krista Trueman own and operate Trueman Blueberry Farms, producing blueberries, raspberries, and honey at their eighth-generation operation on Etter Ridge Road in Aulac, N.B. Although they produce a moderate size fruit crop, the main focus is their commercial honey operation, which includes about 1,000 hives, typically producing 18-20 tons of wildflower honey each year. A large number of their hives are leased to other crop growers in the Maritimes where they’re used to boost pollination. 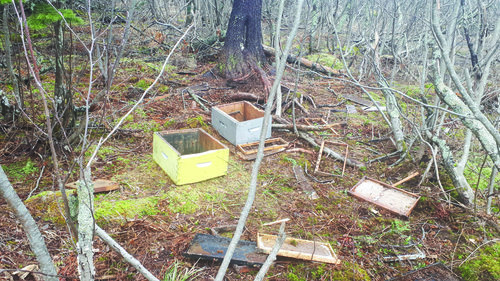 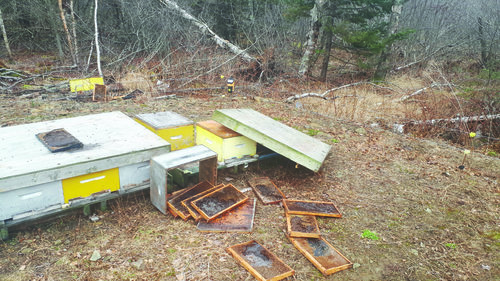 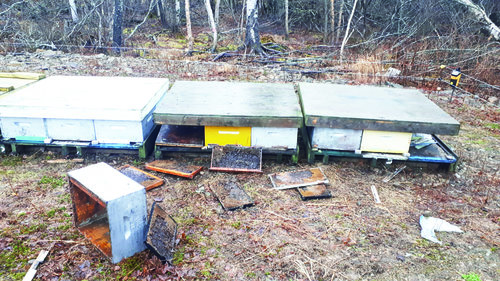 But the bear problem is getting a bit much this year, Tom Trueman admitted recently.

“We’ve always had problems with bears,” he said. “Really, it would be odd if we didn’t get any bears at the hives. But right now, there are a lot more bears around than there used to be. The ones we’ve been seeing lately are a mother bear and her three-year-old triplet cubs. And she’s trained them how to get over and under and around the (electric) fence. So we’ve got four problem bears now, instead of just one.”

“When they’re done with a hive, what’s left is just a bit of firewood,” said Trueman, adding that most bees die as the result of an attack – either directly or indirectly.

And the wily bears don’t appear to be afraid of getting caught in the act, as some of the hives are close to the Trueman home.

“Some years, if it’s warmer and there’s more food for them, they don’t bother with the bees as much,” said Trueman. “But when they wake up from hibernation and it’s cold, wet, and there’s not a lot of food around, they’ll put up with stinging bees to get something to eat. That’s why they are more active this year.”

Trueman said in past years he’s asked provincial natural resources personnel to live trap and relocate bears, but that’s not an easy task.

“You have to be careful,” he said. “If the bear is nursing a cub, you can’t separate them. And even if she’s not, it can still be quite challenging. So we don’t often do that. You just have to ride it out. This year’s been tough. They’ve been around eight or nine nights so far.”

Trueman said he’s hoping the bears will move along so he can assess the damage for this year and get on with the spring bee chores.

Tom’s Best brand honey is sold at the farm’s onsite produce outlet and in local retail stores, and a good amount is also used in the production of the farm’s increasingly popular homemade ice cream.

“Bears are smart,” said Trueman. “They know what they want and they figure out how to get it. But we’ll be glad when they’re done with our hives for this year.”