A Spanish study on the adaptation of long shelf-life Mediterranean tomatoes grown in greenhouses and open fields was issued on 4th December 2018. Long shelf-life tomato (Solanum lycopersicum) landraces, characterized by carrying the alc allele in the NOR.NAC locus, have been traditionally cultivated in the Mediterranean region. These materials are adapted to open field conditions under low input conditions. However, cultivation under greenhouse is expanding fueled by increasing demand of these traditional tomatoes. 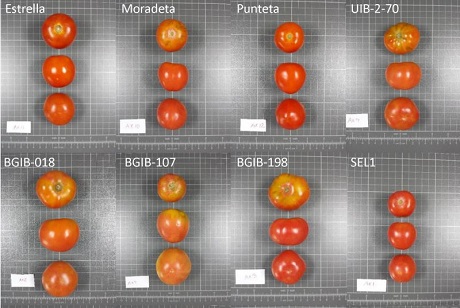 “We hypothesized that the large diversity in the long shelf-life landraces and derived materials can be exploited for adaptation to these new cultivation conditions. We have evaluated 12 varieties (seven landraces, three selections and two hybrids) carrying the alcmutation under open field (OF) and greenhouse (GH) cultivation, and evaluated them for 52 morphological, agronomic, chemical properties, and chemical composition descriptors,” explained researchers from Universitat Politècnica de València.

“All descriptors, except six morphological ones, were variable. The variety effect was the greatest contributor to variation for most morphological traits, as well as for fruit weight, fruit shape, dry matter, and soluble solids content. However, significant environmental and genotype × environment interaction were found for 36 and 42 descriptors, respectively.”

Fruits from GH plants had lower weight and firmness and were less red than those from OF. On average, in GH yield was 35% lower and daily fruit weight loss in post-harvest 41% higher than in OF. However, fruits from GH had on average higher dry matter and soluble solids contents, antioxidant activity, glucose, fructose, and ascorbic acid concentrations, but lower contents in lycopene and β-carotene than those from OF.

A principal components analysis clearly separated varieties according to the cultivation environment. However, the distribution pattern of varieties within each of the two clusters (GH and OF) was similar, despite the strong G × E interaction for many descriptors.

“The results reveal a high impact of the cultivation environment on morphological, agronomic, chemical properties, and chemical composition of Mediterranean long shelf-life traditional tomato varieties. This suggests that breeding programs specifically focused to adaptation to greenhouse conditions should be developed.”

Workshop: From Best Practices to Practice – Earth Observation for Agro-Insurance