East Africa - Getting ready for return of destructive locust swarms

In 2020, East Africa was struck by the worst locust plague in decades. Unfortunately, now, the swarms are returning.

The locusts invading East Africa last year ravaged crops and pastures and drove the levels of hunger and economic hardship higher in parts of the region. One year later, right at the start of 2021, the United Nations has warned that a second and maybe even deadlier return of locusts has already begun.

The first wave of the pests emerged at the end of 2019, numbering in hundreds of billions, multiplying by a factor of 20 per generation, according to the UN Food and Agriculture Organization (FAO). The second generation in March and April numbered in the trillions. A plague that spread like wildfire — up to now. 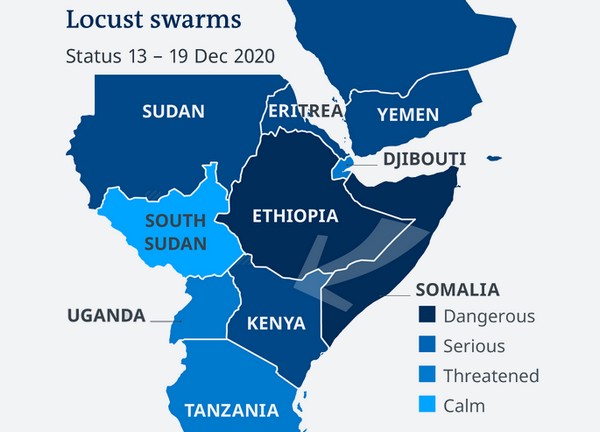 “It’s a continuation of the 2020 locusts swarm. The adults have flown to various areas and are laying eggs”, Frances Duncan, Professor of Animal, Plant & Environmental Sciences at the University of the Witwatersrand said. “If we have good rains like it is the case at the moment in most areas, the hoppers will hatch, and we get the second wave of the swarm.”

However, Keith Cressman, FAO’s Senior Locust Forecasting Officer, remains optimistic. “I think it’s still a very dangerous situation. But it should not be worse as it was last year.” According to the weather forecast, the months to come should be dry, reducing the locusts’ reproductive rate.