Today marks the latest release of the AHDB Planting and Variety survey results, providing planted area estimates for the 2020/21 season.

This season has cast many challenges to UK growers. Starting off with the rain soaked end of 2019, we saw winter planted acreages decline in favour of later spring drilling options. Then, the lack of significant rainfall events from March until June affected crop quality and hit yield forecasts. Today, we are seeing a wet start to July and the beginning of harvest.

Taking a look at the GB total wheat area first, we estimate a 25% reduction to planted area from 2019, estimated at 1,363Kha. The largest declines were seen across England, with all English regions recording double digit percentage declines.

A watch point for the upcoming season is the potential widening of Northern delivered premiums. Large decreases in the wheat area for the North West (-49%), North East (-16%) and Yorks (-32%) will likely incentivise domestic movement of wheat up the country. Though it must be noted, the degree of imported feed wheat into Northern ports may likely pressure this.

Spring barley was a favoured spring crop option for many GB growers. As such, the overall GB barley area is estimated at 1,358Kha, a 19% increase year-on-year.

The GB winter barley area declined by 34%, estimated at 296Kha, following the wet weather, throughout the tighter drilling window.

In the upcoming season, barley will likely have to price close to export parity, especially if the 8.0Mt+ crop is realised. UK barley export values (FOB E.Coast – Hvst) were quoted at £134.00/t yesterday. With Brexit on the horizon once again, the UK may face an increased need to export before potential tariffs at the beginning of 2021.

The oat area for England and Scotland is estimated at 211Kha. Small declines to the Scottish planted area (-2%) were countered by English increases (+26%). This follows a resurgence in the oat area over recent, with varieties increasingly being grown to help combat black-grass. Though, Human and Industrial demand for oats has stayed largely stable in recent years.

Winter OSR crops were affected by the wet autumn and cabbage stem flea beetle damage (CSFB) during early growth stages. Some growers opted to reseed fields, whilst others with heavier crop losses ripped up fields and planted other spring crop options.

The combined England and Scotland OSR area is estimated at 387Kha, down 26% year-on-year. The Scottish planted area saw a slight increase (+2%), perhaps due to the colder temperatures limiting CSFB damage and survival rates over winter.

The English area is estimated at 355Kha, down 28% year-on-year. This is the lowest recorded English planted area since 2002.

Currently, domestic rapeseed markets are awaiting preliminary harvest yield figures to observe the full damage of the difficult season. Recently, I examined short and longer term market factors for UK OSR. The UK will greatly depend on imports to meet domestic demand. 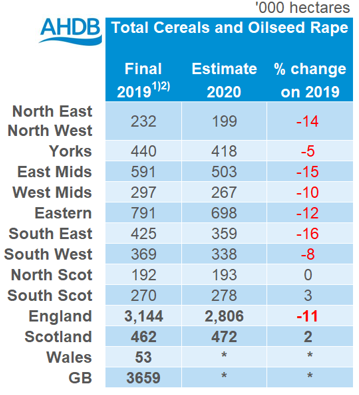 East Africa - Seeing the worst swarms of locusts in many decades