Reduced 2020/2021 peach and nectarine production globally, due to bad weather

Global peach and nectarine production is expected to decline by 1,1 million tons to 21 million tons. Adverse weather conditions are affecting production in China and the European Union. These are the largest producers of these fruits. That means reduced global supplies, which, in turn, will shrink world trade. 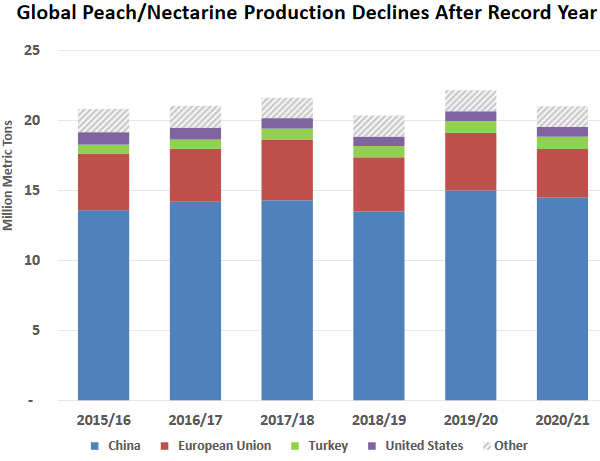 Production in China is expected to drop by 500,000 tons to 14,5 million tons. The country experienced heavy snow in April in most of its peach-growing provinces. That affected the fruit. Exports should decrease by a third, to 80,000 tons. That’s because of the continued Russian boycott of imported Chinese fruit. That includes stone fruit. Russia used to be China’s third-largest market. Russia imposed the ban in August 2019, citing phytosanitary issues.

Imports to China are estimated to climb by more than 40% to 38,000 tons. That’s due to a sharp rise in Chilean imports at the sales season’s start. That was before COVID-19 disruptions affected shipments.

EU production is expected to drop by more than 600,000 tons to 3,5 million tons. That’s after last year’s record supplies. Again, bad weather is to blame. It hit Spain, Italy, Greece, and France. There had been an overproduction of peaches in recent years. That led to an acreage reduction in Spain, Italy, and France.

Spanish farmers even switched part of their production to nuts. The drop in production should decrease exports by 24,000 tons to 155,000 tons. But imports are expected to increase only slightly. That’s because demand is mostly met by local supply.

The United States may now export nectarines to China. That’s according to the US-China trade agreement signed in January 2020. The General Administration of Customs of China (GACC) published a list on 26 April. It contains the names of approved American packaging companies. That officially opened the market for certain American nectarines. These come from five counties in California. Since the release of these names, trade figures show that shipments have begun.

Turkish production, on the other hand, is showing growth for the sixth consecutive year. It should rise by 40,000 tons to 870.000 tons. That’s thanks to the good weather in the country during the fruits’ flowering and harvesting times. There is a parallel growth in Turkish exports. These should increase by 40,000 tons too.

Exports should reach a record of 140,000 tons, almost tripling in four years. There are higher supplies and less expected competition in Russia. That’s thanks to China’s absence. This export success stimulates further investment in peach and nectarine cultivation. In turn, that’s leading to a further peach and nectarine acreage expansion. The demands of exports and a growing juice industry must be met.

Production in Chile is also expected to increase, but only slightly. It should reach 170,000 tons, thanks to good growing conditions and a stable acreage. Exports should rise a little too. Chile is expected to send larger consignments totaling 105,000 tons to China.

Production in Australia is expected to be 5,000 tons higher than the previous 120,000 tons. That’s thanks to the continuing winter cold and adequate water supplies. Australian production has been on a modest upward trend since 2017. This should continue in the coming years.

That’s because the older peach and nectarine trees are being replaced by newer varieties, with higher yields. COVID-19 related air freight challenges will mean export will be reduced to 13,000 tons. That’s despite the increased stock. Domestic consumption is, however, expected to increase to 109,000 tons.

Russian imports are expected to break the last two year’s downward trend. There should be a slight recovery to 200,000 tons. That’s thanks to Turkey’s larger shipments. These will more than compensate for China’s banned supplies.