On Monday 10 June around 5 PM, the heavy weather that had been forecast caused massive damages around Borgloon, Belgium. The thunderstorm accompanied by hail in particular means apples will now only be good for industry when they’re harvested. The hail went straight through the skins. Although the leaves of the pears were under the trees and skins have been much affected, fruit production adviser Jeff Helsen expects the pears will grow out of it, although they won’t become smooth again.

This week, the thunderstorms went from the north of France via the southwest of Belgium to the northeast of Belgium. Hail also fell around Brussels, but hardly any fruit is grown there. The Waasland (East Flanders) and other Belgian fruit production regions were free from hail. Heavy rain with a chance of (local) thunder and hail are also expected from Wednesday to Saturday. 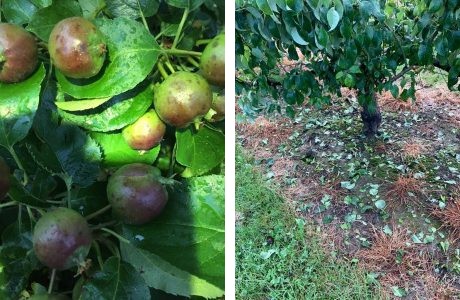 The OFH also received notifications from the region around Borgloon after downpours this week. The Netherlands only reported an incidental notification. After the thunderstorms of the past week, reports only came from Belgium, with hardly any from the Netherlands.

South Africa - Roadmap to a win-win against invasive weeds