The occurrence of erratic weather over past years, like the 2019 spring heat wave in the Western Cape that led to poor plum fruit set, is increasing in frequency.

Professor Stephanie Midgley, scientist responsible for climate change and risk assessment at the Western Cape Department of Agriculture at Elsenburg and Extraordinary Professor in Horticultural Science at Stellenbosch University, last week presented climate model projections on what the future might hold specifically for the eleven pome- and stone-producing areas across the Western Cape and the Langkloof.

“Probably no one better understands the potential effects of climate change on the southwestern parts of South Africa,” remarks Prof Wiehann Steyn, general manager at Hortgro Science, and the possible effects are disconcerting but, he adds, it’s not all doom and gloom. There is a lot that farmers can do, set out in Hortgro’s climate change response strategy. 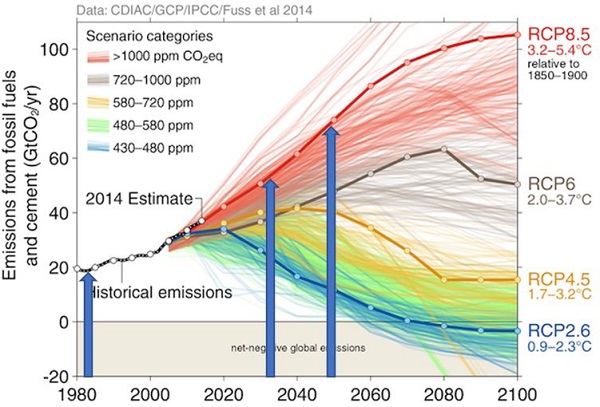 Over the past two years, in collaboration with Prof Roland Schulze, hydrology Professor Emeritus from the University of KwaZulu-Natal, and Nick Davis, a modeler and database specialist, high-resolution maps based on quinary catchments across South Africa were produced to depict expected impacts of climate change on key variables that determine farming outcomes.

The Hortgro report is now available, with an online app to follow next year. The modeling and mapping has been done for the whole country at a detailed level but the Hortgro report focuses on the pome fruit and stone fruit production regions.

The way the rain falls is going to change
“Temperature is fairly straightforward,” Prof Midgley says, “there is clear evidence that South Africa has been warming. In future, the southern parts are projected to experience milder warming, with more serious warming expected as we go inland to the Karoo. However, we shouldn’t just look at annual temperatures, we should look at it seasonally or even monthly.”

In some areas, the first rainfall events are starting later in autumn and ending later in spring. Moreover, rain-carrying frontal systems are being pushed southwards and make landfall less frequently, which is what global climate models indicate for the south-west of South Africa. Future drying is projected in most Mediterranean-type climate regions worldwide.

Interestingly, rainfall data of the last fifty years already show significant wetting of the northeastern parts of the province and extending into the interior of the Eastern Cape.

“The way the rain falls is going to really change, even if the annual rainfall doesn’t. Water resources are going to become severely limited and groundwater will become an increasingly important part of our resources,” she says, adding that the Western Cape already has a relatively high variability of rainfall, up to 60% interannual variability in the arid areas.

High rainfall days seem to be increasing across the world and the models also show that the number of very high rainfall events will be increasing. “We are also expecting longer dry spells, so more days on end without rain, and fewer rain days. An increasing probability of drought across the Western Cape and South Africa looks like something we should prepare ourselves for.”

The climate data is too scarce to accurately model future scenarios for strong wind and hail, she says. “We’re expecting a stronger influence of high pressure systems combined with more intense heating, especially in the summer rainfall areas where we could see these systems strengthening and along with it southeasterly winds.”

Sunburn and excessive heat
The future risk of sunburn of apples (modelled using the known weather conditions that can cause sunburn) increases by up to five days per month in the warmer production areas.

Particularly in the Berg River Valley, up the West Coast and in parts of the Klein-Karoo this is where the risk of sunburn could be higher. Late harvesting apples in the Ceres region are also at risk, which, noted Prof Steyn, concurs with what they have heard from the growers that this was again a late sunburn year in the Ceres region. The risk seems to be increasing later into the harvesting season.

She postulates that the future for pome fruit in the Wolseley and Piketberg areas is not certain because of the increased heat stress and evaporation indicated by the models.

Southwestern coastal production regions like the Elgin, Grabouw, Vyeboom and Villiersdorp (EGVV) area show a lower increase in sunburn risk, measured as up to two additional days a month.

Earlier blossoming dates increase frost risk
Frost risk significantly reduces in future according to the models but this does not mean that it will be totally eliminated.

“Blossoming dates might advance earlier, and since the incidence of frost will decrease, the damage when a frost does occur may be more severe if we have dropped our guard. The recent late frosts in France’s wine-producing areas provides a case in point,” she remarks.

The Langkloof’s winters and summers are expected to get much warmer, especially in the western part, and there are indications of future increased heat stress, but in other respects, e.g. sufficient remaining winter chilling (see below), it’s not looking too bad.

“The models suggest that the Berg River valley will become much warmer, especially Wellington northwards. That’s an area that might start giving problems, with dry spells and increase in evaporation. The Breede River valley results are not as bad.”

Loss of red colouring chances and chill units
Later apple cultivars start colouring up in March in the production areas like the Koue Bokkeveld, the EGVV area and the Langkloof but the models show that there could be a reduction in the number of days conducive for apple colouring. She calls the predicted reduction in an area like the Koue Bokkeveld concerning, but remarks there will still be days suitable for colouring.

“In April, that’s when the first cold weather starts coming in and as we go into the future, we see a decrease in the number of days conducive for apple colouring and with it, chances become fewer for red colour development.”

There will also be loss of winter chilling across the country, which was modelled by mapping during which month the respective thresholds of 250 positive chill units (PCUs), 500 PCUs and 700 PCUs are reached. Many areas historically receive 250 PCUs by May and June, but in future it could be the case that only mountainous and high-lying areas still reach the 250 PCU threshold by May, but the areas shrink.

“The model for 500PCUs, which is generally the minimum what you need for most apples, shows that where that would usually be reached by June, it could now be reached only by July, and in some cases only by August,” she sets out.

“The model for 700PCUs, which is what is needed by the high-chill varieties, show there aren’t many areas that will in future be reaching that threshold by July.”

In the high-lying areas of the Eastern Cape, like the Drakensberg foothills, there are still areas that will receive high chill and there might be new areas opening up for fruit.

She says she’s not too concerned about chilling units in the Koue Bokkeveld and the Langkloof, although that might depend from year to year, but it’s in the southern and the coastal areas where chilling could become problematic, for instance parts of Elgin that will not reach 250 PCUs by May but in future only reach that a month later. The Breede River Valley looks to reach its 250 PCU threshold by July in future.

The EGVV and Riviersonderend areas will suffer most from loss of chilling and days conducive to red colour development.

“The stonefruit-producing area of the Berg River Valley is an area to keep an eye on,” she says, “with 250 PCUs not being reached until August which for some of the medium and high chill stonefruit could be a problem.”

4-8% increase in water demand
“Water is one of my big concerns,” Prof Midgley remarks. “The models show that some of our big catchments could become drier and the dams possibly not fill up the way they used to.”

She notes the biggest projected reductions in stream flow across the Western Cape in the Berg and Breede river systems, while towards the east there could be an increase in summer rainfall and maybe even increasing stream flow, although this is very uncertain.

Consequently, irrigation demand will increase because of evaporation increases, up to 100mm annually and a 4 to 8% increase in irrigation water demand is expected.

Interestingly, despite “some serious warming” indicated for the Klein-Karoo, she points out that the potential increase in evaporation is not as much as she would’ve thought, but any possible reductions in streamflow and groundwater levels would be very concerning.

Genetics offer scope to adapt to climate change
“Things look very different in future for different regions, depending on their current climate and how things eventually pan out,” she emphasises. “Producers need to understand the microclimate on their farm, and track and monitor weather on the farm.”

She advises producers to plan now what to take out and what to plant, based on possible climate futures, even if that means making a shift from, say, pome fruit to stone fruit or to redder and lower chill selections. Prof Midgley is currently developing a climate change response strategy for Hortgro and the deciduous fruit industry.

There are many climate mitigations and adaptations at the disposal of fruit growers, Prof Steyn notes. “Some measures, such as hail/shade netting, are already becoming much more commonplace while efforts are also underway to increase water use efficiency. Improved genetics, possibly one of the best longer term climate change adaptations, will also provide growers with plenty of opportunities to remain sustainable despite the changing conditions.”

USA - As wildfires worsen, more California farms are deemed too risky to insure

Brazil - Government warns of frosts in corn and wheat areas

EVENT UPDATE: AgroInsurance Conference will be held on October 4-6, 2021