“In just the past three years, soybean cyst nematode (SCN) has spread to 55 new U.S. counties in 11 states,” says Greg Tylka, Iowa State University (ISU) nematologist and co-leader of The SCN Coalition. “The most damaging soybean pathogen, SCN has also infested 24 new counties and rural municipalities in the Canadian provinces of Manitoba, Ontario and Quebec.”

Periodically, Tylka surveys plant health professionals at universities as well as state and provincial departments of agriculture in the U.S. and Canada about SCN’s spread.

“We compared the 2020 results with the 2017 survey. The results reveal steady expansion of the distribution of SCN throughout North America,” Tylka says. “And the pest will almost certainly continue to spread among and within soybean-producing areas.” 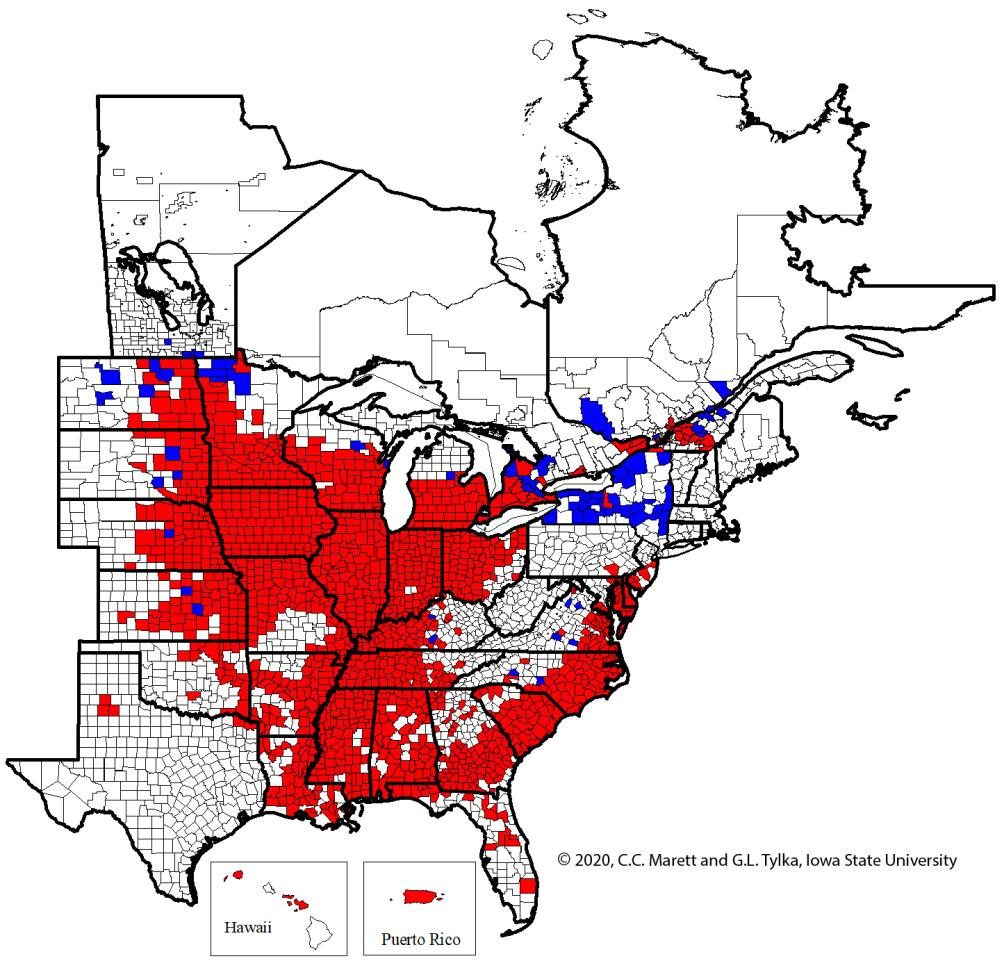 This map shows the distribution of SCN in counties and rural municipalities in the U.S. and Canada as of 2020. Those reported as newly infested since 2017 are shown in blue.

At 29, New York reported the largest number of newly infected SCN counties in the U.S. Gary Bergstrom, a plant pathologist at Cornell University, says the first discovery of SCN in the state in 2016 led to an intensive SCN survey by Cornell Cooperative Extension educators coordinated by the state’s IPM program.

“SCN is now widespread in New York,” says Bergstrom. “Soybean growers are fortunate that in most fields where SCN has been detected, population densities are low, although it’s concerning that a few counties had higher numbers.”

Bergstrom is not surprised SCN continued to spread across New York given its steady expansion of soybean acres over the last few decades. “This should be a wake-up call for soybean growers in New York and neighboring states,” he adds. “SCN is coming to you if it’s not already there.

“Growers are asking more questions about SCN-resistant varieties, nematode-protectant seed treatments, and soil testing for SCN,” he adds. “Coalition resources are invaluable in our efforts to educate soybean growers about the importance of active management. Our next step is studying the virulence of SCN populations to help growers select SCN-resistant varieties.”

Also, in 2020, plant pathologists from several land-grant universities published research examining the economic losses of soybean diseases. Using a variety of statistical approaches, the researchers estimated economic impacts of 23 common soybean diseases in 28 soybean-producing states in the U.S. from 1996 to 2016. The result: SCN caused estimated yield losses of nearly $32 billion during that time. That’s more than $1.5 billion annually.

“The magnitude of economic loss caused by SCN is due to three factors,” Tylka says. “It’s widespread and expanding distribution, its capacity to survive long term in the absence of soybeans, and its ability to consistently reduce yields.”

If SCN is left unmanaged, population densities and the potential for yield losses steadily increase. Unfortunately, SCN often goes unnoticed in fields because aboveground symptoms of damage and yield loss may not be visible.

He encourages soybean growers to look for varieties that don’t contain resistance genes from the PI 88788 breeding line. “PI 88788 has been used in the vast majority of varieties for most of the last 30 years. That’s led to SCN populations increasingly reproducing on PI 88788 varieties and decreasing yields.”

AgroInsurance Covid-19 Survey Report – Register in Advance - Book your seat at the summary webinar on March 10, 2021