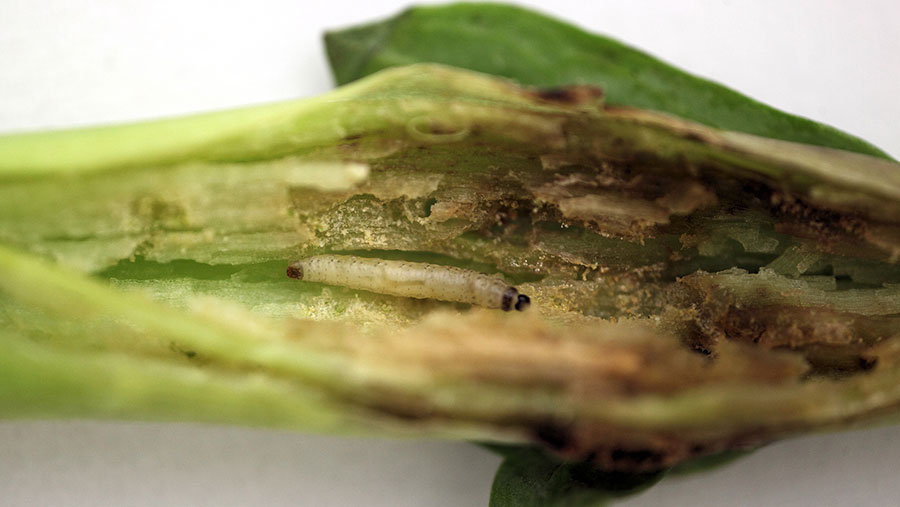 28.01.2019
Over 50 percent of the maize cultivation during the 2018/2019 Maha Season (43,000 hectares) has been infested by the Fall Army Worm (FAW) which made its way into the country recently, Professor of Crop Science, Faculty of Agriculture, University of Peradeniya. Around 75,000-80,000 hectares of maize is cultivated during the Maha Season and around 9,000-10,000 hectares during the Yala season. According to Prof. Marambe the pest has a greater affinity towards maize but could also attack about another 100 plant species. “What is alarming is the adult moth’s ability of a single wind-aided flight of about 80-100 kilometres which enables the pest to be invasive during a short period over a wider land area,” he said. According to research, the pest possess all the characteristics of being invasive, such as short life cycle (about 60 days) and multiple egg-laying cycles (about five times during the 10-21 days long life span of the moth, laying 50-200 eggs). Studies have also revealed that the moth can lay 1,500-2,000 eggs during its life cycle. The pest lives in many plant hosts and the adult moth travels long distances to lay eggs. “The impact of the pest on crops has already been felt with the destruction caused to maize grown mainly to provide part of the animal feed. Loss of maize crop yield will affect farmer income, resulting in loss of investment and loss of foreign exchange due to importation of maize to support industries such as poultry,” Prof. Marambe said. Maize farmers hit by the invasive species are hoping for a speedy solution to the crisis that has taken a toll on their livelihood. However, the silver lining for maize farmers is the prompt action taken by the government to compensate the loss caused by the ‘Sena Caterpillar’ to pay a maximum of Rs. 40,000 per acre. The government has also allocated around Rs. 120 million to address the issue. “The intervention by the authorities will no doubt bring some solace to the affected farmer community,” Prof. Marambe said while adding that Sri Lanka has good plant and animal quarantine services in the ports of entry to the country. The National Plant Quarantine Service (NPQS), for example, is fully geared towards detecting alien organisms, especially pests of this nature, through their rigorous protocols. He said based on the information available, the entry of the pest to Sri Lanka was definitely not due to the weaknesses of the quarantine process. There may be many other ways for the pest to enter such s through aerial routes owing to its capacity to fly long distances, which I understand to be highly likely. However he said in some cases, lack of skilled human resources could delay the screening process. All planting materials legally brought to the country by government or the Private sector goes through this screening process. The biological cycle of the pest indicates little or no chances that it entered Sri Lanka through planting materials imported into Sri Lanka. According to him with over 100 plant species being recorded globally as host plants, including major crops and some troublesome weeds, the situation is critical in terms of eradicating the pest. Unless proper control measures are adopted and action is taken to destroy the species there will be a devastating impact on local crops. Prof. Marambe said an integrated pest management approach has been launched by the Department of Agriculture with the help of all stakeholders, to use five pesticides that could kill Spodoptera spp with techniques that have yielded fruitful results in other instances. The five pesticides are those containing the active ingredients Spinetoram, Spinosad, Emmamectin benzoate, Chlorantranoprole, and a mixture of Chroantraniprole + Thiomexam. These pesticides have been provided to farmers at 50 percent of its cost. Source - http://www.sundayobserver.lk
EVENTS