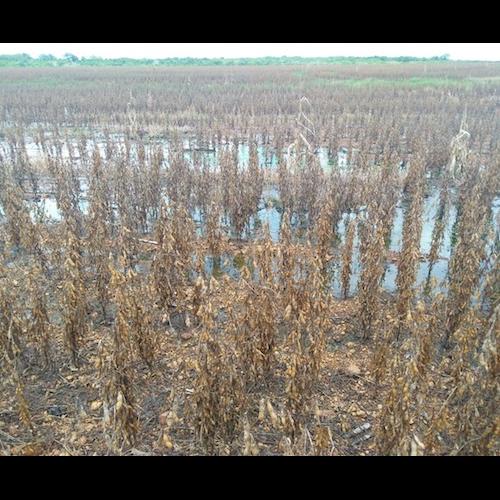 Unusually wet weather this year has kept some Marion County farmers in the fields well into December, trying to harvest the last of their crop.

Roger Groll, who farms corn and soybeans outside Waldo, spent much of the day Wednesday in the fields, trying to harvest his remaining soybeans.

The month of November was "unusually wet," Groll said, with hardly any days to harvest soybeans that month.

Now, in December, he, like other farmers in Marion County and across Ohio, is rushing to get his crops out of the field and into the storage bin.

The National Weather Service does not have an official site in Marion and does not keep official score of rain and snow totals here, but meteorologist Patrick Saunders said that precipitation has been "well above average" in the region.

In Cleveland and Youngstown, precipitation totals so far this year are the fifth highest on record, Saunders said. As of Monday, Newark was a little over an inch away from its 1990 record for the most precipitation in a year.

"It's been a pretty wet year," Saunders said. "I think the same can be said for most of Ohio, too."

Tim Barnes, the agriculture and natural resources educator at Marion County's Ohio State University Extension, said normally, the harvest is completed by Dec. 1, if not before.

"The last two weeks, there was probably more (unharvested crops) out there than in previous years," he said.

For many farmers, it's been a constant "back-and-forth" with the weather, said Abra Dunn, Marion County's organization director for the Ohio Farm Bureau.

"The ground froze earlier this week, so people were able to get some stuff done, but then it thawed again," she said. "Just the ability to get in the fields — it's just been really muddy."

On Wednesday, Groll said he probably had about 15 percent of his corn and soybean crops left to harvest.

The weather was cold enough Wednesday that Groll was able to get into the field and harvest the rest of his soybeans.

But because of the moisture in the air, the soybean crops have not had a chance to dry as they normally do.

"The soybeans, after all this rain, their moisture is running 17.5 percent moisture to 22 percent, and you start looking at a dock of over $1 a bushel because of what it takes to get them dried," Groll said.

Beans have to be between 13 and 14 percent moisture to receive full price at the grain elevators where they are sold. The wetter the beans, the less money the farmer takes home, he said.

Groll said he took a load of soybeans to market Wednesday with about 17 1/2 percent moisture and was docked about $1.08 per bushel. With a load being between 900 and 950 bushels, that means he made about $1,000 less because of the excess moisture.

Barnes, the extension educator, said that the wet weather can also cause a drop in quality of soybeans. If a soybean absorbs too much moisture, the pods can pop open, allowing fungi or other foreign material to damage the bean.

That can cause farmers to lose money at market when selling their beans. If a load of soybeans is found to have too much damage, farmers may be docked a set number of cents per bushel.

On the bright side though, Marion County farmers have experienced "above average yields" this year, Barnes said, which could help offset any losses to their bottom lines from lower quality crops harvested later in the season.